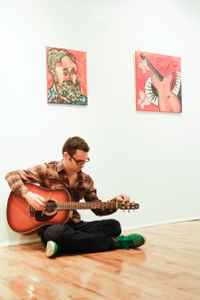 Profile:
Canadian composer, performer (guitar, banjo), improviser born Montréal (Québec), 1977. He was first meant to be an architect or a cartoonist. He showed talent for drawing at a noticeably young age but his passion for comic books faded when he discovered it was more fun to spend time working with people; that’s how he traded his pencil for a guitar at age 15 starting his own band with Alexis Trepanier, today one of the greatest web designers alive. Guitarists David Gilmour, Jimmy Page, Andy Summers and others were among the first inspirations of the young lad. He soon got bored of only playing blues and rock and discovered jazz at age 17 when he studied with guitarist Marc-André Laporte and Éric St-Laurent in Montréal before doing a two-year program at Cégep Saint-Laurent studying with Benoît Charest in jazz guitar.

It’s really at Montréal jazz club l’Air du Temps that he learns to play jazz with the best players in town. He hosted the house band for a year with Magella Cormier (former drummer of Alain Caron) and François Turgeon on bass and started exploring standard jazz as well as free music.

Berthiaume studied with Neil Smolar in Montréal before moving to Toronto to take lessons from guitarist Lorne Lofsky. Toronto didn’t really make it for Berthiaume so he eventually moved back to Montréal before going to New York to study with saxophonist Dave Binney. He heard many great musicians, but his greatest pleasure was to spend time with his new friends from NYC ballet, Ellen Bar and Sean Suozzi, both great dancers who are still inspiring his music today.

It’s really Derek Bailey who among any musician changed Berthiaume’s vision of music. After a first visit to his house in London in 2002, where he chatted with the master of improvisation about life and music, he decided he had to pay him a second visit to do a recording session. That session was later released partly on the label Ambiances Magnétiques on Soshin, Berthiaume’s first album with Bailey and Fred Frith. It was also partly released on Incus Record (Derek Bailey’s label) on Visitor's book.

After a couple of years studying with private teachers, Antoine decided that it was time to go back to school. For some reasons not fully understood yet the dean of Université de Montréal was quite impressed by Berthiaume’s strange path and decided to offer him to skip the B.A. and do a Master in contemporary composition. The three years at Université de Montréal -ending with a semester spent at Mills College in California under the supervision of Fred Frith and Joëlle Léandre - changed his whole conception of music. Contemporary music opened the door for the avant-garde and the unexpected. Among many teachers, Berthiaume was deeply influenced by Michel Longtin and Jose Evangelista.

His latest experience at Mills College was certainly one of the best times in his life. He got to meet pianist Quentin SirJacq and sound engineer Norman Teale with whom he recorded Leaves and Snows also on Ambiances Magnétiques- and was constantly challenge by great improvisers including MaryClare Brzytwa, Teresa Wong and other Mills students. After finishing his Master in 2005, “Master” Berthiaume got back to NYC for half a year to stay with Molly Culver, another major source of inspiration, and studied the guitar with Mordy Ferber before coming back for good in Montréal. Berthiaume almost stayed in New York but the Green Card Wedding being the only option, he decided that this city didn’t deserve him to get into so much trouble.

Berthiaume has played at the FIJM (Montréal International Jazz Festival) for the past three years and is still playing around town in many venues with improvisers and with his “new western” band Rodeoscopique.

Lately, Berthiaume went on tour in Japan where he played with Yuki Saga, Haco, and many local players. He recorded an album in Kobe with guitarist Takumi Seino that was released on VOS records in Japan.

In 2006, Berthiaume will play at the FIMAV (Festival International de Musiques Actuelles de Victoriaville) with SirJacq and Teale in May, in the Seychelles Island with Allan Camille in August, in Paris and Amsterdam with SirJacq and Joëlle Léandre in March, and of course in Montréal throughout the year.

A jazz album will soon be released with Michel Donato and Pierre Tanguay (the latter being Berthiaume’s one and only mentor) and will feature his own compositions. Berthiaume will also be featured in a book by Newyorker Ralph Gibson, State of the Axe, on avant-garde guitarists with words and pictures of Derek Bailey, Andy Summers, Jim Hall, Bill Frisell, Marc Ribot and many others.