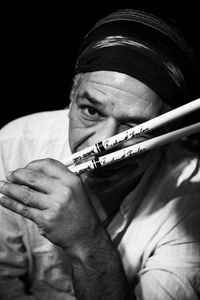 Profile:
Guyanese-born Richard Bailey started his drumming career in Trinidad at the age of nine, sitting in on percussion, drums and even bass guitar with his elder brother Robert's ( Robert Bailey, keyboard -OSIBISA) group, the top band in Trinidad and Tobago at that time. He also accompanied Robert, who played Hammond organ, to perform TV/Live concerts as a duo.

At twelve years old Richard's family moved to London where Richard went to school, sitting in on occasional gigs in his spare time, but while at school Richard also excelled in athletics, becoming Southern England school champ at 100 metres. His father, Emmanuel McDonald Bailey had held the world record for the 100 yards and won an Olympic Bronze for England.
Even so, Richard decided to leave school at fifteen to play drums, leaving behind athletics.

By the time he was sixteen he was recording and touring the UK and USA with Johnny Nash and the great Bob Marley. By eighteen he had recorded Jeff Beck's biggest selling album “Blow By Blow” (1975, Epic/Sony Japan) to critical acclaim and appeared on the film soundtrack “Tommy” alongside Pete Townsend, Phil Chen and Roger Daltrey.
The next decade saw many recordings and tours varying in style from Rock to Reggae to Jazz to Pop and Latin including two world tours with Billy Ocean and Basia.