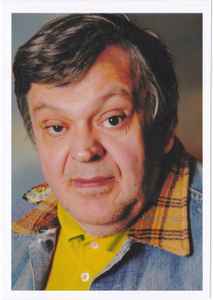 Klaus Beyer was born July 8th, 1952 in Berlin and started filming on Super-8 in 1978. He is a huge fan of The Beatles and begins in 1980 to translate the lyrics into German, so that his mother could understand what they're on about. He also starts to use two reel tape machines to cut non-vocal loops out of the music of the band to use as backing tapes for his german versions. In 1984 he is "discovered" by a neighbor who arranged his first screening in the legendary local off-cinema "Frontkino" in Berlin. As part of the loose "Geniale Dilletanten" group (Die Tödliche Doris, Einstürzende Neubauten, Frieder Butzmann etc.) he receives some recognition. 1985 follows his first live performance with his home made playback loops and live vocals of german language Beatles songs. He is discovered by Georg Maas who employs him as an actor in his short film "Ein Normales Leben", which also features Frank Behnke, who befriends and later manages Klaus Beyer. Some of his films are shown in the film section of the 1986 "documenta" art festival in Kassel.
1987 sees the first feature length film of Klaus Beyer, totally shot on super-8 and transfering a whole Beatles album (Sgt. Pepper's Lonely Heartsclub) into German and into a film ("Hauptmann Pfeffers einsamer Herzenklub"). His second long "Beatles-record-to-film" project is "Die Zaubervoll Rätselhafte Reise" (after "Magical Mystery Tour"). Other albums follow.
He also starts to release some cassettes of his strange and compelling cover-versions.
In 1994 he performs his songs with a live band consisting of members of Mutter in Berlin.
The first of many privately released CDs and CD-rs are published by Amsel Records, run by Frank Behnke, appear at his concerts. Among them a compilation of various sketches, own home recordings, Beatles-loop-covers and live clips, called "Die Fanklubplatte" and various complete Beatles albums in German versions.
More super-8 films follow, VHS-releases of his shorts and also DVD-r releases lately.
Sites:
klaus-beyer.de, Facebook, MySpace, YouTube
Variations:
Viewing All | Klaus Beyer
Beyer, Klaus