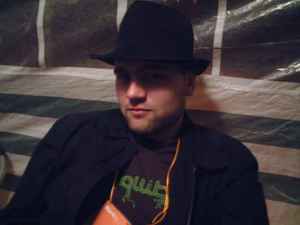 February 4, 2022
Just to continue on, it looks like he is back releasing stuff again, so the blog message may no longer be valid: https://sonarsghost.bandcamp.com/album/processing-time-ep
Reply Notify me Helpful

June 21, 2011
on 2009 Domu stated this on his Blog:
"It’s over. I can’t go into the personal reasons, but of course will leave you some explanation as to how I got here. It feels a bit like walking away from a life of crime or the Mafia. I am Carlito, I have finally made the break from the old dangerous way of making a living. I just hope Benny from the Bronx doesn’t shoot me as I am boarding the last train out of here. The point is that I am no longer Domu. He is a character, always has been, and as of Friday 13th November 2009, he no longer exists. Neither does Umod, Sonar Circle, Bakura, Yotoko, Rima, Zoltar, Blue Monkeys, Realside or any of the other names I put out music under. I am cancelling all my gigs and not taking any more. My hotmail is closed, my Twitter is closed and my Facebook is closed. If any of you want to talk to me and know me well enough to have my mobile number then that is still the same, and please feel free to call any time. My other email address I mail from occasionally is still open to tie up any loose ends.

"I had started to change, for the worse I am now sure. My confusion was growing, my insecurity and bitterness getting out of hand, a lack of creative direction and focus were leading me somewhere very dark. I have felt so depressed by all of this. Believe me I have searched my soul long and hard this year to find the reasons again why I do this, but I can’t locate them. Too much of ‘me’ is mixed up into all of this, and no one should ever give so much of himself or herself to a job. I once believed in all of it, that I made and played music for a certain type of person, for people who didn’t want to adhere to the ‘normal’ way of life, the free thinker, the independent or open minded type who was bored of the genres, the staples, the blueprints or the formulae. The underground. But I just don’t truly believe I am needed in this battle anymore. It has been passed down to another generation, who are doing it their way, and I have no desire to try and edge in and start proclaiming to be fighting a fight that is no longer mine. I am a 31-year-old man. I can’t claim to be holding a torch up to something that meant so much to me at 15. At 21, maybe. But now, after ten years going full time, I think I have said all I had to say. My creative light has dimmed. Maybe because I started so early, who can tell? But I feel satisfied that this is it.

"I have had an amazing time. I’ve travelled the world, drank and partied and made a decent living out of entertaining people throughout all of my 20’s. I met some incredible people in cities I never dreamed I would visit, shared my thoughts and collected wisdom from a huge range of deeply profound and lovely people. But I have also met some real arseholes, and I could feel I was becoming one. Playing records I wasn’t sure I liked to people who had no idea who I was. I had gone cold, cold to the music, to the reactions and to the point of it all. I was changing what I thought I liked, so that I would be liked. I am not a chameleon. I am not Madonna, I can’t stay abreast of the current styles and keep changing with it just to stay in fashion or retain some kind of credible status or career. I have had my moment. If you know me well, you would have sensed a change in me over the last two years. I have always suffered with problems of confidence, but I know that’s not why I am throwing in the towel. I feel like I have to change so much of what I think is ‘me’ to carry on. What I believe in, how to talk to people, how to behave. I just don’t think I can be so arrogant and harsh to stand out anymore. There is so much noise out there that people have to shout louder and louder to be heard. And for what? I am beating myself up over something I no longer believe in for an income that is stressfully patchy and more often than not, very low.

"I used to say I owed it to ‘the fight’ to keep going. My belief in that has waned over the last few years too. Yes we needed Coltrane to go against the grain, to sacrifice his well-being and life to create beautiful art. We needed all of them, creative and unique beings burning brightly in our souls, our influences and idols that created the music and the movements that can provide us with sanity, sanctuary and meaning through our confusing lives. But music has lost some of it’s meaning to me as a medium. It’s everywhere; everyone is making it, playing it, giving it away, and trying to make a living. So many people have a voice in it now it is hard to pick out what is cutting edge from what I actually truly feel. I have gotten numb to my life’s biggest passion, and I need to leave it for a while to see if I can ever get it back to how it was.

"Some have attributed meaning and understanding to my some of my work. I know it is special to some people, and my message was understood by a few, which I am very grateful to have come to know over the years. I was lucky enough to catch a ride in it for a while, was recognised by some very special and talented people and I earned the respect of my peers and achieved a hell of a lot in a short space of time. There have been huge highs whilst playing music to all sorts of crowds, creating an atmosphere and being in control. I have felt the joy and adrenaline rush of the success, alongside the emptiness and despair of the empty club or the unresponsive floor. Now I recognise I have done all that, I need to put it all behind me and move on, and the only way to do that is to disappear. It has to end sometime, and as I keep saying, everything is finite. I don’t want to lose everything else in my life for this. I just don’t believe in it enough to make that sacrifice. The kids are fighting the battle now. I hope I influenced some of them, I know I have, and that gives me a sense of ease doing this. I haven’t wasted 10 years, I know I have bought joy and hope to many of the disenfranchised, the open-minded, the musical outsider or the devoted dancer. There are people creating things and using technology in a way that I am having to try and catch up to, but I no longer feel the desire to. They are doing it better than I ever could now. It’s their time, and mine has passed. You can either think I am being incredibly brave by admitting it or incredibly weak and stupid for stopping. But it’s just how I feel. I was going wrong in many aspects of my life, and I need to start making a change. I have no idea how long this piece will stay up, but this site won’t be here forever. Please feel free to copy and paste and pass on to preserve it, to let others know why I left, assuming anyone cares.

"I have tears in my eyes now. I have so many people to thank for all the personal and professional support they have given me over the years, but I shall do that personally in time. But I want to thank everyone who has bought a song, paid an entrance fee, had a dance or just come up and spoke to me about life, music, the world or whatever. You have given me a dream-like blessed existence for many years. If I have inspired anyone, then I am a happy man. You all have certainly inspired me, and I want to use those years of travelling and sharing to good effect, not this anger and confusion I feel towards it all now. I need to find meaning to the next phase of my life. So I bid you all farewell. I am just too sensitive to keep up the façade of something that doesn’t feel right. I knew it would come someday, maybe some of you that knew me saw it too. I have so much love and respect for my peers and teachers that are carrying on with the struggle, and want the next generation to achieve the best they can for themselves and their art. I am just not a lifer. I’ve traded up, and I’m out.

"I’ll leave you all with this. Life isn’t the X-Factor. No one has a God given right to his or her dream or ambitions coming true. I have worked hard and had some great luck. I followed some opportunities, squandered others. I have no regrets, other than not stopping when I knew I should have done this time last year. The only thing you have to guide you through your life is your instinct. Sometimes the right decision isn’t the easiest, but between your conscience and your intuition you will find the answer. Please listen to it. It’s you."
Reply Notify me 27 Helpful

It's difficult for me to evaluate the musical qualities of Domu's works, beacuase all his tunes that I know share one common flaw. They are underproduced - lacking depth and spatial brightness. I'm sure, in today's abundance of hardware and software possibilities, the rawness and "lofiness" was intended. It just doesn't work for me.