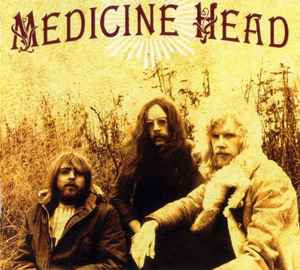 Profile:
British 1970s rock band led by John Fiddler and Peter Hope Evans. The group recorded six albums in the seventies, the opening trio of which were on John Peel's Dandelion label. Fiddler & Hope Evans formed Medicine Head in 1969. At the end of 1971, Peter left for about nine months and John continued the band with John Davis on drums and Keith Relf on bass guitar. They left when Peter returned in the summer of 1972 and the band once again became a duo. It came off the road in October 1973 while Peter and John recruited three more musicians.

Medicine Head switched from Dandelion Records to Polydor as Hope-Evans returned for the album One & One Is One, recorded with various session musicians. The title track became the band's biggest hit, reaching no.3 in the UK in 1973, and they followed it up with Rising Sun (no. 11). For the next album Thru' A Five, the duo were augmented on a regular basis by Rob Townsend of Family on drums, Roger Saunders on guitar, and George Ford on bass. The album featured the Slim Harpo-influenced song Slip and Slide which became the band's final hit, reaching no.22 in the UK in 1974. Despite consistent touring, often as a supporting act, Medicine Head failed to place an album on the UK Albums Chart. For their final album Two Man Band, recorded at Pete Townshend's Eel Pie Studios, they reverted to being a duo.

is there a way to consider these Medicine Head as default and not (2)?
I think it would be more correct