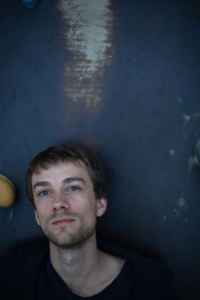 Profile:
Singer-songwriter from Paris, France, Thomas Mery sang and played the guitar in the post-pop-rock band Purr from 1995 to 2000, along with Stéphane Bouvier (now touring with Yann Tiersen), and Jérôme Lorichon (now half of The Berg Sans Nipple).

In the early 2000's, Thomas produced albums by French indie bands such as Playdoh and Téléfax, while starting to experiment on his own on stage with nothing more than an empty sampler. Those heartfelt eletronics experiments led to the release of the "I Matter" EP in 2003.

Thomas Mery then turned to a more straight-forward folk music with his first solo album "A Ship, Like A Ghost, Like A Cell" in 2006, more influenced by English folk songwriters and finger-picking guitar players.

Never ceasing to search and now mostly singing in his native tongue, French, Thomas deconstructs and transforms the codes of folk music to craft his own ones on his latest EP, "Des Larmes Mélangées de Poussière", to be followed by his second full-length solo album in the Spring of 2011.
Sites:
thomas-mery.net
Aliases:
Toulouse (16)
In Groups:
Purr (3)
Variations:
Viewing All | Thomas Mery
Thomas Méry