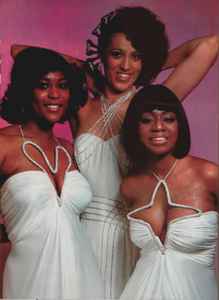 Profile:
Female vocal trio, formed in the mid-1970s which records and performs into the 2020s.

Two of the original line up members were in Honey And The Bees which disbanded around 1972. They were Gwen Oliver (July 21, 1949 - November 27, 2020) and Cassandra Wooten . Later they joined the Philadelphia School Of Performing Arts where they met Cheryl Mason Jacks. The trio later met Richie Rome who would create the Ritchie Family, lending his name but adding a "T" to the name Richie.

The Ritchie Family's first album Brazil used session singers, The Sweethearts and musicians, tracks and vocals were recorded before a group was formed. Oliver, Wooten and Mason-Jacks were not present on the album's recordings. When the album produced a hit, a line up was needed to go on the road and become a visual and live-vocal part of it. Wooten, Oliver and Mason-Jacks auditioned singing "Brazil" and got the part. This is where this trio's involvement began. The second album credited to The Ritchie Family, Arabian Nights was co-written & produced by Ritchie Rome and Jacques Morali and established Gwen Oliver, Cassandra Wooten & Cheryl Mason Jacks as its first official members. There would be more hits as The Ritchie Family in years to come but with different line ups.

The original line-up would reform years later. With this line-up they had a top 40 dance hit in 2016. In late 2020, they announced that they were going to record a new song. After some changes in release date, the original line up of Cassandra Wooten, Cheryl Mason-Jacks (now Cheryl Mason-Dorman) with Renee Guillory-Wearing would have a hit with "Ice" in 2016.Then In 2021, the group announced the release their new single "Whatcha Got?". The release dates were changed. It was then postponed to June 28, 2021."

In 1977 Richie Rome left and producer Jacques Morali took control of The Ritchie Family with his new partners: Henri Belolo, Phil Hurtt, and Horace Ott. The Ritchie Family's fourth album African Queens was released. Richie Rome was no longer involved with the project. They left 20th Century Records and moved to Marlin Records. African Queens was to be the final album for Cheryl, Cassandra, and Gwendolyn, who were replaced by the label. Cheryl and Cassandra would later team up with Michelle Simpson to form Cas Mijac who sang background on John Lennon & Yoko Ono's Double Fantasy album.

Ednah Holt, Theodosia "Dodie" Draher & Jacqui Smith-Lee were to become the first line up in the second generation of revolving Ritchie Family members. Ednah left in 1978 and was replaced by Vera Brown, who became the group's lead singer. In 1979 The Ritchie Family left Marlin Records for Casablanca Records.

In 1980 they joined Village People for the movie Can't Stop the Music and appeared on the soundtrack album. Later, Dodie Draher would be replaced in 1982 by Linda James when the group moved to RCA Records.

After deciding to split, when group owner Jacques Morali discovered he had AIDS, the group continued as "Vera Brown and the The Rich Girls" for one song called "Too Much Too Fast."

In the 2010s the Ritchie Family was reformed with original members Cassandra Wooten and Cheryl Mason-Dorman (formerly Cheryl Mason-Jacks) . An interview in 2019 with Lenny Fontana on his "True House Stories" show revealed that in the early stages of reformation, Michelle Simpson from Cas Mijac had been part of the venture. After a stop and a re-start, they settled with Renee Guillory-Wearing replacing Gwen Oliver (aka Gwen Wesley). It was with this line up that the group had a top 40 hit in 2016 on the Billboard dance chart with "Ice". The Ritchie Family Facebook page (https://www.facebook.com/orignalritchiefamily/) has pictures of her with Wooten, Mason-Dorman and Guillory-Wearing. One photo shows the four of them on stage suggesting a possibility that Gwen Oliver may have joined them on stage to perform.

Gwen Oliver aka Gwen Wesley was married to trombonist Fred Wesley and they had two sons. In her later years, having left music, she lived life as a committed Christian, she was active in her church, involved in Bible study.
Gwen Wesley died on November 27, 2020 at age 71.

* Live it Up with Donna Drake The Ritchie Family now represented by Martha Wash (Aug. 2016)
https://www.youtube.com/watch?v=3ISAAzAjg_E