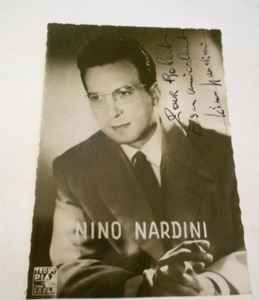 Georges Teperino was born in 1912, to an Italian father and French mother into a family of musicians. His father, a violinist and composer, was his main music teacher. He started his musical career early, at the age of seven, directing a philharmonic orchestra. While still a child, he formed the 5-piece orchestra "Les Diables Rouges" with his friend Roger Roger, which performed at local swing clubs on weekends between the 1920's and 30's.

After the Second World War, he worked conducting and composing Spanish and Mexican ethnic and folk-related music.
He formed the Nino Nardini Orchestra in 1951. They were, among other things, featured in "La Chansons de Paris", a weekly musical program wich took place at the Theatre des Champs Elysees. The orchestra continued to perform dance and pop music live at the "Circus 58", allowing Teperino to fine-tune his arrangements in dance styles like paso doble, foxtrot and cha cha cha.
He also conducted the orchestras of Radio Luxembourg, Radio Circus and Radio Theatre in Paris as well as taking conductor duties at a French circus, learning with it the arrangement 'trickery' and instrumentation to back the circus' gags and jokes.

In the early 1960's, he, along with Roger Roger, started work composing for music libraries, recording in various styles, often featuring instruments like the harpsichord, marimba or electric organ, and later analog synthesizers and electronic keyboards, instruments which he also featured in his pop arrangements at the time. In the mid-60's, he constructed Studio Ganaro with Roger Roger and Francis Gastambide, which him and Roger used to record and produce their compositions. Teperino and Roger both had fruitful careers in library music, composing a large amount of works for French and British libraries, also experimenting with electronic music in the late 60's and early 70's onwards. Their library music has been, and continues to be featured in numerous radio programs, animations, TV shows and films all over the world.

Nino Nardini, The funk Dj's choice for absolute madness. He took experimental risks with a solid dose of psycho. If you get to hear "Afro Beat" on the reissue of Jazzman, you know what i am talking about. Completely bonkers.