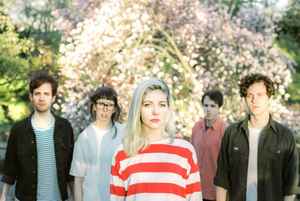 Sometimes it can be hard to admit when one is wrong. I jumped to conclusions about you and judged you harshly without getting to know you. I got caught up casting a harsh eye on your bottled blonde deadpan attitude without taking a close look at your charming inner spirit.

It seems so stupid now, because I should have never doubted Polyvinyl's high opinion of you. Plus, Sloan is rarely mentioned in your presence, which is crazy because Nova Scotia is so close to both of your hearts.

I am not ashamed to admit it was a video for “Dreams Tonite” that started to erode my initial negative view of you. What was I thinking! Once I accepted you for who you are, I was smitten. “Dreams Tonite” led to “Plimsoll Punks” to “Party Police” to “Archie, Marry Me” and I was hooked now and forever.

Please forgive me, Alvvays, I am just a jaded middle-aged record collector prone to placing too much importance on mere trifles. I love Teenage Fanclub as much as you do, so it is almost hard to believe I ever doubted you! Accept my deepest apologies and be assured I will spread the word far and wide about your clever songwriting, hooky guitar playing and lovely vocal melodies.

We're only two albums into this thing, but I can't wait to see where this crazy thing goes. I know you have so much more to offer and I hope you know the Maritimes are proud of you!