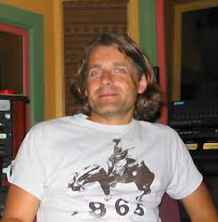 Real Name:
Buck Henry Sanders
Profile:
A film score composer best known for his work on the movies "The Hurt Locker" and "Max Payne."
He was born in 1971 and moved to Los Angeles in 1989 in order to continue a career in music. In 1997 he met Marco Beltrami and became his assistant. Sanders was involved in programming synthesizers and writing additional cues for his scores.
He was nominated for an Academy Award in 2010 for "The Hurt Locker."
Sites:
Wikipedia, imdb.com