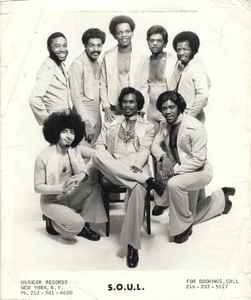 Real Name:
Sounds Of Unity And Love
Profile:
The Sounds Of Unity and Love, formed in 1970 in Cleveland and soon after entered a talent show where they won first prize, a record deal with Musicor records. The members; Larry Hancock, Lee Lovett, Gus Hawkins, Paul Stubblefield and Bernard Taylor had all been performing locally before they got together to form S.O.U.L. Their first single for Musicor "Down In The Ghetto" came out in 1971 and did well enough for the label to invest more time and money in them. Another seven singles came out between ´71-74 on the Musicor label. The group cut one record for the Dynamo label as well (a subsidary of Musicor records) in 1975 before going their seperate ways
Members:
Bernard Taylor, Gus Hawkins, Larry Hancock (2), Lee Lovett, Paul Stubblefield, Walter Winston
Variations:
Viewing All | S.O.U.L.
S.O.U.L, S.O.U.L. (Sounds Of Unity& Love), SOUL, Soul