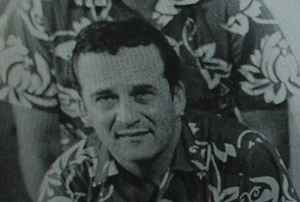 Real Name:
Bernie Kaai Lewis
Profile:
AKA Bernie Lewis
1921-1984
Composer, arranger, conductor, songwriter, vocalist and all around musician, notably ukulele & steel guitar.
Bernie Kaai Lewis was born in Hakalau, Hawaii on September 14, 1921. Bernie was adopted from the Laukea Lewis family of Kona, Big Island. A talented musician, Bernie was composing music by the age of 14 and was educated at the Chicago Conservatory of Music at the University of Chicago. Bernie arranged and composed over 300 songs. Some of his hits include, "California", "Hilo Bay" and "In the Evening by the Sea". From 1973-1974, Bernie was the musical arranger for the Flip Wilson Show as well as a staff composer, conductor and arranger for NBC in 1942. He was a member of the American Society of Composers, Authors and Publishers and the Hawaiian Professional Songwriters Society. As well as being a talented composer, Bernie was a gifted vocalist and musician. He recorded over 600 sessions as a vocalist, arranger and steel guitarist on numerous labels. Bernie died in 1984.
Sites:
digicoll.manoa.hawaii.edu, hakushouse.com, hakushouse.com
In Groups:
Bernie Kaai And His Hawaiians, Bernie Lewis Orchestra
Variations:
Viewing All | Bernie Kaai Lewis
B. Ka'ai, B. Kaai, Bernie K. Lewis, Bernie Kaai, Bernie Kaii Lewis, Bernie Lewis, Kaai