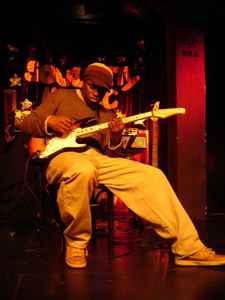 He performed at the first Hip-Hop Musical "Jam On The Groove" with his crew GhettOriginal in 1996, which toured the United States, Brazil, Israel and Japan.

In 1996 he meet Special FX, a B-Boy from Copenhagen, Denmark, who introduced him to Cora E & DJ Esther from Heidelberg, Germany. soon after Akanni relocated to Cologne, Germany, where he recorded his classic tape "2009" with Future Rock from Creme De La Creme.

Upon joining Mellowbag, Akanni relocated to Berlin, where they recorded and released the album "Bipolar Opposites" on Downbeat Records. Akanni., no longer with Mellowbag, concentrates his energy on his own group Star Eye, which features a live band as well as his DJ, Dr. Chris from Cologne.

Star Eye have released numerous singles, as well as an LP "Soul Melodics" on FM Recordz. He is currently involved with a new musical called "Clap Ya Hands" which is being performed in Berlin.
Sites:
MySpace
Aliases:
Akanni Humphrey