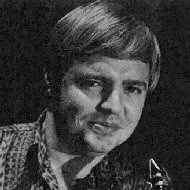 Real Name:
Ed Logan
Profile:
Born in Memphis, TN in 1945. Died in April 2000.
Saxophonist Ed Logan began his musical career working with the Bill Black Combo. Then he went on to studio recording and association with the Memphis Horns until the mid 70's, recording on numerous Stax tracks. With Memphis Horns, he recorded for Al Green, Stephen Stills, Rod Stewart, B.J. Thomas, Isaac Hayes and Elvis Presley. In the 90's, he was in the group Coupe DeVille.
In Groups:
Le Rn'B All Star, The Memphis Horns
Variations:
Viewing All | Ed Logan
Ed. Logan, Eddie Logan, Edwin Logan

July 28, 2010
Before all of that Ed was a member of The Cavaliers in Memphis in 1961. Tommy Ruble was the vocalist. The Cavaliers were from San Angelo, Texas and in 1964 had "Last Kiss" with J. Frank Wilson. Ed was a heck of a sax player and a big fan of Duane Eddy. Knowing this I purchased a Duane Eddy model Gretsch learning his stuff. Ed's friend Charles Eldred (piano) also played in our group. Charles died in a car wreck the same year only 19 years old.
Reply Notify me Helpful