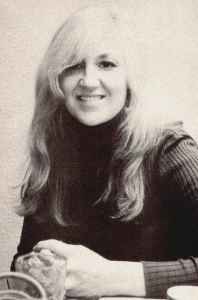 Real Name:
Pamela Joan Sawyer
Profile:
Producer and songwriter born Pamela Joan Sawyer in Romford, Essex, England who is responsible for some of the biggest Motown hits, including the gold record “If I Were Your Woman”, which Gladys Knight & The Pips took to #1 on the Billboard R&B chart and the top ten on the Billboard pop chart in 1971. (It has since been covered by Alicia Keys and Stephanie Mills)

One of her co-writers was Gloria Jones, who recorded the original version of “Tainted Love”. The two of them combined to write and produce The Commodores’ first single, “The Zoo (The Human Zoo)” in 1972. It was Jones who suggested to Sawyer that Lionel Richie should sing lead vocals for the group.

Sawyer wrote “Love Child” with Henry Cosby, Deke Richards, R. Dean Taylor, and Frank Wilson. It was one of the last #1s for Diana Ross & The Supremes, even though it was not The Supremes, but The Andantes, backing Ross. Ross scored with another Sawyer composition, “Love Hangover”, which was co-written by Marilyn McLeod. The song went to #1 on the pop chart and was nominated for a Grammy award, and has since been nominated for induction into the Dance Music Hall of Fame.

Perhaps Sawyer’s most infamous collaboration was with singer-songwriter Lori Burton in the ’60s. The two of them penned The Young Rascals’ first hit, “I Ain’t Gonna Eat Out My Heart Anymore”, which scored a modest #52 on the charts but at least put them on the map. When they couldn’t find a band to record one of their songs, they made one up, literally. The name of the “group” was The Whyte Boots, and “their” debut single was “Nightmare”, an homage to (or parody of, depending on your point of view) The Shangri-Las’ “Leader of the Pack”. It has become a cult favourite although at the time it was extremely controversial, and many radio stations wouldn’t play it. The plot of the song ends in a grisly death at the hands of the singer/narrator. Rhonda Copland, Kathy Francis and Page Miller were asked to pose as “The Whyte Boots” although they had nothing to do with the song other than that and it was Burton supplying the vocals. There was even some brief coverage of “the group” in Go magazine, but the girls quickly exposed their own ruse when Burton went into the studio to record her Breakout album, which included “Nightmare”.