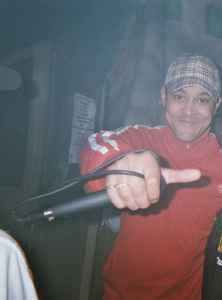 His career began as a dancer for The Brainstorm Crew, and act on Formation Records. When they went on a small promotional tour he picked up a mic and became their MC. His regular break (and first flyer appearance) was at Hyperbolic, before he became resident MC at the Pleasuredome in Skegness.
Aliases:
Carl Billsborough
Variations:
Viewing All | MC Storm
Carl Storm, Storm

July 2, 2022
Storm never let me have a go on the mic at Slimming vinyl

July 1, 2022
Famous for Calling Sy a Nonce and making stupid sounds must be in his 50s time to get a real job