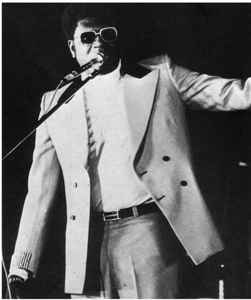 Real Name:
Gerald Emeka Pine
Profile:
Singer and guitarist from Sierra Leone (born in 1934 in Enugu, Nigeria, on 1 February 1934 / died of illness in Port Harcourt, NIgeria, on 9 November 2008) who was one of the first artists to become successful while incorporating American funk into the growing West African Afrobeat scene of the mid to late '60s. To the sounds of the likes of James Brown, the Sierra Leonean Nigerian musician infused strong African percussive elements and the revolutionary stance that permeated throughout Africa at the time. Also characteristic of Geraldo Pino's music were the distinctively funky sounds of the Hammond B-3 organ. As Pino was selling-out shows in Nigeria he made a huge impression on Fela Kuti. Kuti then followed suit and incorporated similar funky elements into his live shows and recordings. It is said that Kuti then moved to America in order to promote his music because he didn't believe he could compete with Pino's popularity in West Africa. The move proved beneficial for Kuti who immediately caught the ears of Western producers and audiences. Meanwhile, Pino and his influence on the development of Afrobeat remained relatively unknown outside Africa until recently.
Sites:
Wikipedia, vanguardngr.com, blogs.voanews.com
Aliases:
Geraldo Pino's Show Train