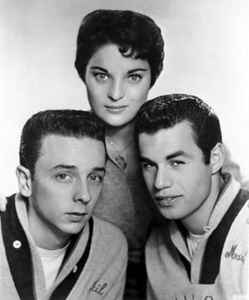 Profile:
The only group in which Phil Spector performed before he became involved behind the scenes as a producer.

They had a major hit with the Spector-written track "To Know Him Is To Love Him" (inspired by the epitaph on Spector's father's tombstone). Released on ERA Records subsidiary label, Dore, it went to #1 on Billboard's Hot 100 singles chart, selling over a million copies by the end of 1958.

Their next track, after they had signed with Imperial, "I Don't Need You Anymore", stalled at position #91.

Several singles and their album "The Teddy Bears Sing!" failed to do as successfully, and the band broke up in 1959.
Sites:
Wikipedia
Members:
Carol Connors, Marshall Leib, Phil Spector
Variations:
Viewing All | The Teddy Bears
Teddy Bears, Teddybears, The Teddybears, テディ・ベアーズ