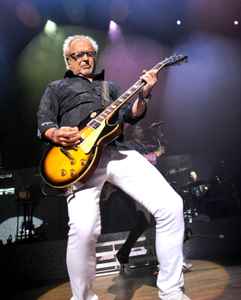 Real Name:
Michael Leslie Jones
Profile:
English guitarist, songwriter, and record producer (born 27 December 1944, Portsmouth, England.
Before his success with Foreigner he was member of several bands like The Hustlers, Nero And The Gladiators, State Of Micky & Tommy (with Gladiators drummer Tommy Brown) and Spooky Tooth, and also worked as a session musician for Peter Frampton and George Harrison. In the 60s he worked as musician and arranger in France along with Tommy Brown (3).
With Ian McDonald he formed Foreigner in 1976 and today he's the only original member that is still part of Foreigner.