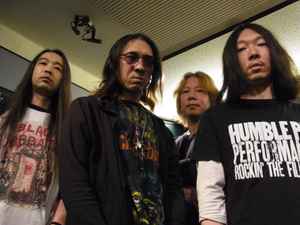 Profile:
Church Of Misery was formed by Tatsu Mikami in the spring of 1995 to play very individual DOOM rock influenced by early Black Sabbath and 70s heavy rock, with lyrics dedicated to famous serial killers like Manson, Dahmer, Ramirez, etc. The first album was recorded immediately after formation, to be released independently by the band, but was then released as a bootleg by a US label. This earned the band a lot of recognition in the international underground for their carefully crafted and memorable songs and their authentic 70s sound.

After the bootleg CD release their original singer was replaced by Nobukazu Chow. This line-up released a lot of material on various labels like the now legendary psychedelic/doom label "Bad Acid" (Electric Wizard, Farflung etc), and Frank Kozik's Man's Ruin Records. Despite the fact that they didn't play outside Japan until Fall 2005 the band was held in high regard around the world.

After the replacement of singer Nobukazu with Yoshiahi Negishi they signed with Southern Lord and released their first full-length album "Master Of Brutality" in March of 2001. Local gigs followed from 2001 to 2003 with the band often not playing actual songs but just jamming in freaky doomy Sabbath rock style. By the spring of 2004 Church Of Misery had signed with the Japanease label Diwphalanx. The second full-length album "The Second Coming" was released in July 2004 and featured 2 new members Hideki Fukazawa and Takenori Hoshi. In the fall of 2005 Church Of Misery executed their first European tour in support of the European version of "The Second Coming" from Salvation Records.

In 2014 everyone besides Tatsu Mikami left the band. He found a new vocalist and guitarist next year, but he recorded the next album, 2016's And Then There Were None... with US guest musicians. After a new drummer joined they resumed touring in 2017.