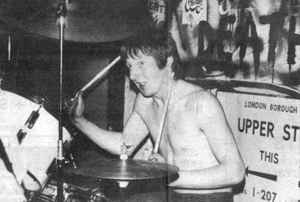 Real Name:
Christopher John Millar
Profile:
As drummer with The Damned from 1976 to 1995 (except for a brief period during 1977-78), he was one of the best known figures in punk - mainly because of his name, and penchant for burning and otherwise destroying drum kits - but also as the self proclaimed "fastest drummer in punk"