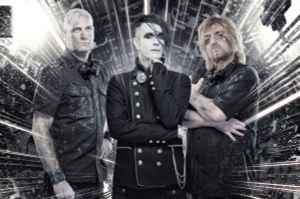 Profile:
Hamburg-based Project Pitchfork started in 1989, primarly inspired by electronic New Wave artists such as Ultravox, The Human League, Invisible Limits, early Skinny Puppy, and the more pop-oriented era of SPK. Another influence was the New Age movement that included acts like Jean-Michel Jarre and Vangelis. At that date, Pitchfork had become one of the most popular music groups of the German Dark Wave culture.

July 8, 2022
Do they have any interest whatsoever in reissuing their early 90s albums... Seems like no.

The band has completely exhausted itself over the past 11 years and finally tired even such loyal fans as me. All albums since 2009 just look the same. This is in complete contrast to their old albums of the 90s and 2000s, when each new album was a discovery. It would have been better to continue developing Imatem side project-because it had much more of the spirit of the group than it does now. Now it's just a press for squeezing the last money out of aging fans.

June 17, 2021
i think project pitchfork sounds like the neon judgement which is fantastic : )~

So my fist exposure to Pitchfork was in '96 when I picked up the Cleopatra compilation "The Early Years" on the recommendation of a local shop owner who like me was also a big "electro-industrial" fan. I fell in love with it immediately and and it wasn't long after I had acquired there entire back catalog, and En Garde and Chakra Red that were released shortly after. I've always thought Dhyani to be a little primitive sounding and not as interesting, but I can say with confidence that I love all of their output from Lam-Bras through to Daimonion (with the exception of Steelrose and it's countless remixes that I never much cared for). With Inferno and Cascade I started to lose interest... to me the music started to become more generic and less creative, less interesting. I didn't follow them beyond that, until I went back over the last three years or so and have picked up all the albums released from 2009-2016. Though I have only listened to each a few times, none of them have blown me away, again they seem to be churning out the same generic stuff over and over.. nothing really stands out as special for me.

July 7, 2020
Since there is some obvious controversy over the opinions on this band, I thought it would be fun to weigh in and see if more people get triggered lol.
I discovered them by a couple of "IO" era tracks I heard on their europian label sampler "The Tyranny Off The Beat" by OffBeat records. The 2 PP tracks it contained (while certainly interesting and unique) did not inspire me to buy anything by them right away (unlike Haujobb's amazing World Window). That type of interest didn't begin to manifest until I heard the mix of their "The Animal" track on "Industrial Revolution: 3rd Edition". That track sill mesmerizes me to this day. So I went to their N. American distro label website (Metropolis) and listened to some audio samples from their most recent release at the time which was "EON:EON". That was enjoyable enough for me to purchase the album and a single. And I stayed a pretty loyal fan of that era (which had PP getting away from the more Puppyesque sound of their early days and trading for a more gothic synthwave sound; staying just dark enough to shake off the dreaded "future-pop" label and keep electro-industrial/EBM fans like me happy. That began to take serious changes starting with "Dream, Tiresias!". Which found Spilles' voice trading actual smooth singing for a much more gravely, dark sound. In addition to the vocals, the instrumentation was also more stripped-down and not as melodic. I wasn't particularly fond of the changes even if I respected them. The album had its moments but I just couldn't get into it like the prior 4 albums. And that has continued with subsequent releases. I also find their theatrics and cover art to be rather derivative, egotistical, and silly. It's like a bad Hot Topic commercial. And it borrows motifs, fashions, and theatrics created by much more influential bands such as Skinny Puppy, NIN, and Marlyn Mansion.
See 1 reply

August 10, 2014
The first review is so horrible and should be removed for such an epic band as Pitchfork. The reviewer obviously doesn't get them or barely listened to them to make such a harsh opinion and compare them to bands they have little in common with. Almost all the industrial/EBM bands from the 1990s I listened to are now either defunct or releasing mediocre stuff at best. The last 3 full length releases by Project Pitchfork however may be the best things they have ever done, at the least they hold up to their best work of the 1990s. The reviewer under this one however, got it exactly right. There is something to this band unlike any others I have ever listened too. They are not standard EBM, and they do not fit in an exact genre category, which is part of the brilliance of this band. In the 1990s the album IO originally got me into them. It sounded like something actually recorded by aliens, as it doesn't compare to any artist than or now. I could go on for ever about this band, yet like all great things you really cannot put into words how great they are. You cannot listen to one album or one song by this band and get a feel for them whatsoever. It was a slow learning process with them for me. Extremely glad I gave IO those extra spins in the 90s. Originally the song "Bodies" had me interested in checking them out. The one thing to avoid when first trying them is their videos with the most views on youtube like "timekiller" for example. Personally I would start with the song IO and go from there.... Chakra Red is also one of the most unclassifiable albums out there, it is great and to this day sounds like nothing else I have ever heard. I disagree with the first review in their fame status, they are too un-conventional to really ever have a mass following (or at least their best albums are). The masses in my country worship rap and country, so what the hell do the masses know anyway? They masses can keep their crap and I will keep my Pitchfork albums.
Darrel Eschedor
See 2 replies

January 18, 2010
They are the best band I know, and I listen to a lot of very progressive contemporary electronic music. Even their stuff from the 90s is AMAZING. I really mean it, the things they create are literally from the future, not just an imitation of what the future might be i.e. futurism. So, sometimes his titles aren't bang on, but remember English isn't his native tongue. It's almost like Peter Spilles is a medium for an angel, he has these incredible brilliant moments lyric-wise and composition wise, on some tracks it's not at that level. But when it is, it is really better than anything I've ever heard. And like I said I'm constantly listening to today's top European producers.

June 10, 2008
Project Pitchfork was one of my favorite bands in the early nineties because they combined the best sensibilities of the three related styles of music which I favored most at the time: Gothic, Industrial, and Electro.

Obviously, they were not for everyone. For me, however, I appreciated their classical composition as well as their song-writing. It was by far not the most "tough" or dark sounding band out at the time... but the spiritual wisdom of their lyrics intrigued me.

My favorite albums by them are Lam-bras, Entities, and Io.

October 16, 2007
I always found Project Pitchfork to have really silly song titles, silly appearance, and mostly silly music over the years. They're not a very good example of EBM although they're commonly lumped into that category. More appropriate I would call them "gothic electronic" music which is somewhere between Sisters of Mercy and A Split Second, if I had to pick two bands. They are still popular to a degree in their home country of Germany but I could never understand why they had such success, none of their music really does it for me. To each their own.
See 3 replies