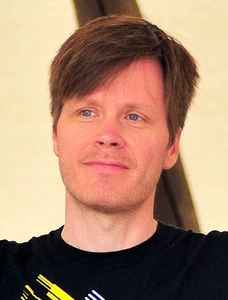 Real Name:
Gerard Hanson
Profile:
Gerard Hanson was born in 1972. He hails from Dallas, Texas USA. His productions have reflections with Basic Channel/Chain Reaction sound. His main inspirations are Juan Atkins and Derrick May. His music also has influences from Stefan Robbers, Red Planet and Carl Craig. He found a way where everything came together: Deepness, Minimalism and Soul, the Detroit-Berlin connection. In 1994 Gerard Hanson and Dan Kurzius started ‘Hardsync’, a Magazine dedicated to electronic music reviews and artist interviews. It has been defunct since 1996 as a result of a computer crash. Hard Sync was an outlet for several Texas-based electronic music enthusiasts to reach out to others around the world that shared similar musical interests. He released his first 12" on Matrix in 1995. From 1995-1997, he released five ep’s, and then only two more in the next six years until 2005. After that some other labels approached him but just wanted more of the same and didn't really seem to understand his sound. After that he stopped releasing music and produced only for his personal usage. After a couple of years the label Down Low convinced him to pick up his producing again. He is very careful about sharing his music with the rest of the world. In the last decade he only used the aliases Convextion and E.R.P. (Event Related Potential). E.R.P is an electro-edged moniker. Gerard has remained willingly anonymous since his debut in 1995, but he came out of obscurity for a debut European Live performance in London in April 2006.
Sites:
Facebook, Bandcamp
Aliases:
E.R.P., Gerard Hanson, I/O, Syne Language, T/O/L, Time Light Curve

May 1, 2019
Fantastic productions and spirit from this dude. Really love that I was able to catch him twice in LA now. 2018 visit was magical, he got really deep into it. I was freaking out screaming by the speaker.
Reply Notify me 2 Helpful

April 25, 2016
definitely one of the greatest minds in 'modern' electronic music.

if you ever read this, thank you for your music gerard !
Reply Notify me 24 Helpful

February 26, 2016
how is there not a Convexion comp or re-release out yet? you'd think Rod Modell would be all over this...
Reply Notify me 5 Helpful