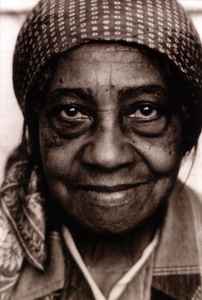 Cotten wrote most of her music in her early teens and earlier (she wrote "Freight Train" at age 13). After marrying at 17 and getting work as a maid she stopped playing music for 40 years. It wasn't until she was working as a maid for Charles Seeger, an avid music lover, that she taught how to play the guitar.

In the 1950s Mike Seeger began to record Cotten on reel to reel tape. In 1960 she began to play live for the first time, her first show was with Mike Seeger and she went on to perform with musicians such as Mississippi John Hurt, John Lee Hooker, Muddy Waters and many others. Because of the positive reaction Cotten received, she began to write again and with her new material and her standards she continued to tour and record into the 1980s. In 1984 she won the Grammy "Best Ethnic or Traditional Recording" for the album Elizabeth Cotten - Live!.
Sites:
Wikipedia
Variations:
Viewing All | Elizabeth Cotten
Cotten, Cotton, E. Cotten, E. Cotton, E. コットン, E.Cotten, E.Cotton, Elisabeth Cotten, Elisabeth Cotton, Elisabeth Cotton "Libba", Eliz. Cotten, Elizabeth Cotton, Elizabeth “Libba” Cotten, LIbba Cotten, Libba Cotten, Libba Cotton, P. James & F. Williams, P. James/F. Williams