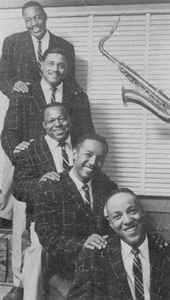 Profile:
The origins of the Scamps go back to the late 30s and a CCC (Civilian Conservation Camp) in Parsons, Kansas. There, workers Earl Robinson (from Kansas City, Kansas) and James Whitcomb (from Baxter Springs, Kansas), along with two others, would entertain to pass the time. A Mr. Mason nicknamed them "The Scamps of CC Camp," and the nickname stuck. As time went on, the unremembered two would be replaced by brothers Wyatt and Torrence Griffin (two more Kansas City residents).

The lineup of the Scamps (they decided to keep the CCC name) was as follows: Earl Robinson (lead vocals and cocktail drums), Torrence Griffin (first tenor and dancer), Wyatt Griffin (second tenor and guitar), James Whitcomb (bass and bassist), and Rudy Massingale (piano, sax, and occasional background vocals). Their first professional appearance was at the Sherman Bar, at 9th and Locust, in Kansas City, Missouri.

Since the Scamps played various instruments as well as doing vocals and dancing, they made a decision to become a full-spectrum act, not just singers. Johnny Tumino, of Consolidated Orchestras of America, became their manager.

Tumino booked them into some appearances in California, and they all piled into Rudy's father's car and drove out there. Tumino got someone from the Bihari Brothers' Modern Music come to see them perform, and they were offered a contract (which only Wyatt signed).

The Scamps - 1947 The Scamps first appeared on record in January 1947, with "Don't Cry Baby" (a tune that had been a big hit for Erskine Hawkins). It was backed with "More Than You Know," which had been a charter for Ruth Etting in 1930 (and, most recently, for Perry Como in the summer of 1946). Earl Robinson was to lead all their Modern releases
Sites:
uncamarvy.com
Aliases:
The Five Scamps
Members:
Arthur Jackson (4), Eddie Saunders (3), Orestes Tucker, Rudy Massingale
Variations:
Viewing All | The Scamps (4)
Scamps