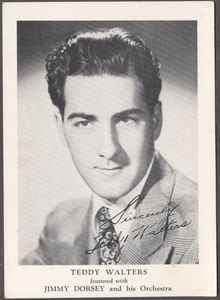 Walters, the son of drummer Danny Alvins, started out as a guitarist in the bands of Ray Noble and Raymond Scott. In May 1942, he joined Charlie Ventura's Orchestra, only to be lured away that same October by Gene Krupa. When Krupa's orchestra was disbanded in early 1943, Walters recorded with Billie Holiday. In late 1943, Walters briefly joined Tommy Dorsey's orchestra. When Tommy realized he could sing as well and sounded very much like Frank Sinatra, he featured him as a male vocalist, causing a sensation. Tommy offered Walters a five-year contract but insisted on a cut of all future earnings should Walters decide to go solo. Instead, Walters made a few more small combo recordings with Sonny Greer and Cozy Cole, then joined Jimmy Dorsey And His Orchestra on guitar and vocals in June 1944, again to great public acclaim. In October 1945, he did enter on a solo career as a vocalist, signing first with ARA, then with Musicraft. In April 1946, his recording of "Laughing on the Outside (Crying on the Inside)" reached the Top Ten, but later efforts did not create much of a stir. By 1948, Walters' career had faded and he returned to Philadelphia where he died a few years later of cirrhosis.
Sites:
bandchirps.com, Wikipedia, allmusic.com
In Groups:
Cozy Cole All Stars, Earl Hines And His All-Stars, Eddie Heywood And His Orchestra, Gene Krupa And His Orchestra, Jimmy Dorsey And His Orchestra, Sonny Greer And His Rextet
Variations:
Viewing All | Teddy Walters
T. Walters, Ted Walters, Ted Walthers, Teddy Walter, Teddy Walthers, Teddy Waters, Walters, Walther