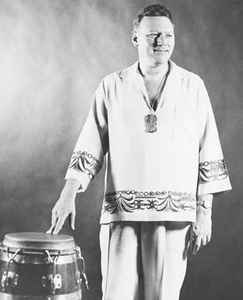 Profile:
Born April 10, 1911 in New York, Mr. Denny toured widely with big bands in the 1930's, served in the Army Air Corps during World War II, and in the mid-50's found himself in Hawaii with an engagement at the Hawaiian Village Hotel at Waikiki. His group, a quartet that also featured Arthur Lyman on the vibraphone, played around a pool at the hotel in a natural setting, performing soft arrangements of popular songs with an odd instrument or two from Hawaii or places in Asia and the South Pacific such as conch shells, Indonesian and Burmese gongs, Japanese kotos, boobams and even the local forest animals and so in serendipity blended ingredients of Easy Listening, Jungle Noise, Smooth Jazz, Polynesian "Tiki" instrumentation, that would become Mr. Denny's musical signature sound: Exotica.
Mr. Denny's recording of Les Baxter's "Quiet Village" was released as a single in 1958 and reached the Top 5 of the Billboard pop charts.
His first album, "Exotica," with its image of a sultry model of indeterminate ethnicity peeking through a bamboo screen, stayed at No. 1 for five weeks in 1959.
"Exotica" and successive albums with titles like "Forbidden Island," "Afro-Desia" and "Primitiva" provided the soundtrack to the trend for stylized Polynesiana - tiki cups, Hawaiian shirts and the bikini - in the early cold-war era.
He died on Wednesday March 5 2005, at his home in Hawaii Kai, near Honolulu. He was 93.
1990: Winner of a Nā Hōkū Hanohano Lifetime Achievement Award under the auspices of the Hawaiʻi Academy of Recording Arts.
Sites:
Wikipedia
In Groups:
Martin Denny And His Orchestra, The Martin Denny Group
Variations:
Viewing All | Martin Denny
Denny, Denny Martin, Los Exóticos Sonidos De Martin Denny, M Denny, M. Denny, M.Denny, Martin Denny And His Music, Mr. Martin Denny, The Exotic Sounds Of Martin Denny, The Exotic Sounds of Martin Denny, The Sounds Of Martin Denny