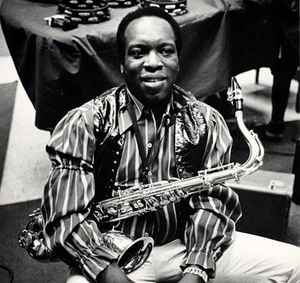 American saxophonist who played rhythm and blues, jazz, and rock and roll. A bandleader, band member, and session musician, he was also a musical director and record producer.
Born: February 7, 1934 in Fort Worth, Texas
Died: August 13, 1971 in New York, New York (Murdered by junkies)

Successful both as a solo artist -best known for his 1967 hit Memphis Soul Stew- as well as a session musician and producer. Curtis mainly played and composed rhythm and blues or soul but also some Rock and roll and great bop or soul jazz. He was inducted into the Rock & Roll Hall of Fame in 2000.
From raresoul.com:
"More than 2,000 people attended King Curtis’ funeral at St. Peter’s Lutheran Church in Midtown Manhattan.

King Curtis is still by far, the most influential saxophone player in the history of R&B and Rock & Roll music.

King Curtis played on thousands of records as the most in demand saxophone player, from the early 1950s until his death in August of 1971.

He worked with a wide variety of artists ranging from The Coasters and Buddy Holly, to Jimi Hendrix and John Lennon.

King Curtis began playing the saxophone at a young age in Fort Worth, Texas. He turned down a scholarship to pursue an opportunity as a member of Lionel Hampton’s touring band.

In 1952, King Curtis moved to New York to become one of the most in-demand session players, where his famous style of playing can be heard on classic songs like “Yakety Yak” by The Coasters, “Twistin’ the Night Away” by Sam Cooke, “Tossin’ and Turnin’ By Bobby Lewis and numerous others.

In 1961, King Curtis released his own hit record with King Curtis And The Noble Knights titled “Soul Twist,” which landed at #1 for two weeks in April of 1962.

In 1965, he supported The Beatles at Shea Stadium (including a number backing Brenda Holloway), signed with Atlantic Records’ Atco imprint and in 1967, King Curtis hit big with the singles “Memphis Soul Stew” and “Ode To Billie Joe,” while also leading Aretha Franklin’s backing band, King Curtis & The Kingpins.