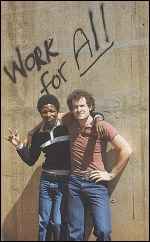 Profile:
Johnny Clegg (who went to six different schools in three different countries in five years and was learning to play classical Spanish guitar) was 14 years old when he heard a garden boy by the name of Charlie Mzila play guitar at a corner cafe in Yeoville, Johannesburg. The sound of the Bellini guitar intrigued little Johnny, and over the next few years he learnt fundamentals of the Zulu culture and traditional "inhlangwini" dancing and stick fighting as he accompanied Mzila to the migrant labour haunts.

This raised the attention of another migrant worker, Sipho Mchunu, who had come to Johannesburg in search of work. In 1969 he tracked Johnny down at his home and challenged him to a guitar duel in his kitchen. This sparked off a friendship and musical partnership and they started playing together as a duo under the name of "Johnny and Sipho". Their infectious melodies and gentle presence didn't disguise the fact that this union between an illiterate gardener from rural Zululand and a Joburg academic was as radical a musical statement as it was possible to make at the height of apartheid repression.

Their first musical breakthrough came in 1976 when, as "Johnny and Sipho", they secured a major recording deal and produced their first hit, "Woza Albert". Under the guide of producer Hilton Rosenthal, the band Juluka (meaning "sweat that comes from dancing" in Zulu and named after Sipho's head bull!) was formed around these two core members.
In late 1979 their first album, "Universal Men", was released. The album was a musical journey into the life of the Zulu migrant worker, living and working in the city, but continually travelling home, caught between two different worlds. It received no airplay but became a word-of-mouth hit.
A second album, "African Litany", was released two years later and was greeted with critical acclaim. An immediate follow-up album, "Ubuhle Bemvelo", was released in 1982. Recorded entirely in the Zulu language, it continued to mix Western and African styles of music and appealed to a niche market.

Juluka were most fruitful during 1982 and 1983 with tours of the USA, Canada, Germany and Scandinavia. In 1983 they released "Work for All" and a year later "Musa Ukungilandela". In the six years that they were initially together, the band recorded two platinum and five gold albums and became an international success.

Juluka was disbanded in June 1985 as Mchunu returned to his roots in Zululand to herd the family cattle and become a livestock farmer - although he did make some solo recordings afterwards, financed and promoted by Clegg.

Says Johnny: "Juluka was Sipho and me. Our band members changed all the time. We went through, like, eight drummers and five bass players. They couldn't understand what it was we were trying to do." Sipho "has 29 kids and five wives. He didn't want to tour anymore internationally, and so the band broke up."

Clegg, since 1993, has gone solo, performing live with "The Johnny Clegg Band".