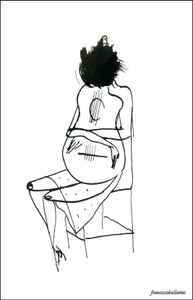 Marie e le Rose is a sound artist.
As a child, thanks to her family, she has always been surrounded by music. She began playing guitar at age of 5 and grew up as a multi-instrumentalist: bass, piano, drums, flute and many other instruments. She grew up listening to jazz, classical music and french music, then she got crazy for electro sounds. She approached electronic music and contemporary classical music later, around her twenties, when she discovered Webern, Berio, Maderna, Nono, Kraftwerk, Tangerine Dream, Terry Reilly and other great artists.
Meanwhile she started to discover the sound design and the use of computers and machines for the creation and modification of sounds.

She worked with many labels for releases (Forrest Hill Records, No Problema Tapes, Time Released Sound, Laverna, Zamzam Records, Chemical Tapes..) and compilations (.txt label, comfortzone label, ....) with many monikers referring to just as many concepts (Marie e le Rose, Moon Ra, MonoLogue).
She composes and realizes music for radio, tv and movies. She realizes sound design for video installation, for mapping and for many other performances (e.g: Apparati Effimeri, vIDEA,...). She performed in many festivals and places: Festival Sons Libérés (Bruxelles), Festival La Centrale (Bordeaux), FreeQ (Genova), MamBO museum (Bologna), Galerie Hus (Paris),...
Her installations have taken place at: Pecci museum (Prato), Palazzo Reale (Milano),... She collaborates with various artists (Giuseppe Cordaro aka con_cetta, with whom she formed the duo called "buttinelli.A"; Daniele Principato, with whom she formed the duo "Rue Analogique, 11", Giulio Aldinucci,…) and of course she continues her career as instrumentalist for different performances (e.g.: readings, as the performances with the well-known writer Luca Bonaguidi, "rimusicazioni", and so on)