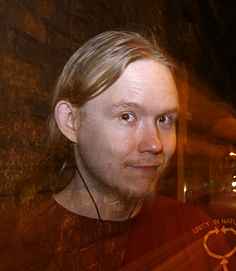 Born October 26, 1978 in Helsinki, Esa first became interested in computer music when he was 6. Some of his early favorites were the songs created for C64 games, later modules by such luminaries as Aleksi Eeben, Niko Nyman, Sami Järvinen, and others, on the Commodore Amiga. By 1994, Esa had shifted his musical interests to ambient/IDM and has later on flourished as a member of the Helsinki scene, providing music for various netlabels like Monotonik and Kahvi Collective.

Currently, Esa continues to release thru several international labels and explores new tracks & techniques at his flat in eastern Helsinki.

May 22, 2021
I'm grateful that Esa Ruoho has blessed our world with his music. It's one of the best IDM around. Unmissable.
Many hugs from Brazil.
Reply Notify me Helpful

I can't express to you enough how powerful and gratifying your contributions have been for me. Keep up the good work. Always a fan of yours. Thank you
Reply  See 1 reply Notify me 1 Helpful

Human verbal and written communication has not evolved to the level where
we might be able to describe the contents or interpret the meaning of Esa Ruoho's work
entitled Container. He channels the operas of long detatched future alien civilations into
a form which appeases the limitations of our primitive human minds. Its not often that an musician
is able to create a work of such stunning beauty. From futuristic hip hop derivitives
ambient bassline creations, the creator employs a melodic intuition from which every twinkling
structure descends, piercing the grey haze of bassline and synth washes with intense beams of
analog sunrays. The next step in evolution will undoubtedly involve humans trancending the grevious
limits of verbal and written communications and developing emotional psychic interfaces, an audible
representation of which may resemble the work of LACKLUSTER.