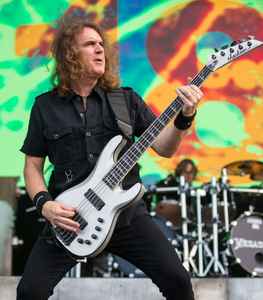 David Ellefson is best known as the original bass player for Megadeth, a band he helped found with guitarist/frontman Dave Mustaine in 1983 following Mustaine's dismissal from Metallica. Ellefson, known as "Junior" within the band, remained the only player to perform with Mustaine and Megadeth throughout the band's initial run from 1983 through 2002. When Mustaine resurrected the Megadeth name in 2004, Ellefson was not included. An unsuccessful lawsuit brought by Ellefson against Mustaine over Megadeth rights and royalties only served to heighten tensions between the former band mates. Although Mustaine would announce that the two had eventually settled their personal differences, he did not foresee Ellefson ever rejoining the band, and Megadeth released 3 studio albums with different bassists. In the meantime, Ellefson performed with the groups F5 and Hail and went to work for Peavy Amplifiers.

In February 2010, it was announced that Ellefson had rejoined Megadeth. He remained a member until May 24, 2021, when they split up with Ellefson again due to a grooming scandal he was involved in.
Sites:
davidellefson.com, Facebook, YouTube
In Groups:
Altitudes & Attitude, Angels Of Babylon, F5 (3), Killing Machine (2), Knight Fury, Megadeth, Metal Allegiance, Temple Of Brutality, The Alien Blakk, The Lucid
Variations:
Viewing All | David Ellefson
D. Ellefson, D. Elllefson, D.Ellefson, Dave "Jr." Ellefson, Dave "Junior" Ellefson, Dave Ellefson, E. Ellefson, Ellefson