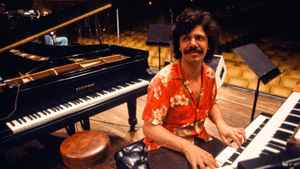 Real Name:
Armando Anthony Corea
Profile:
Chick Corea was an American jazz composer, arranger, keyboardist, percussionist, bandleader and recording artist of southern Italian descent, born June 12, 1941 in Chelsea, Boston, Massachusetts. This very prolific musician played anything from Bebob, Post Bop, Free Jazz, Latin Jazz and Crossover to Wolfgang Amadeus Mozart and Béla Bartók, as well as solo piano improvisations, including being one of those defining Jazz Rock and Fusion in the 1970s, both solo and in Return To Forever and Circle (5). He acquired his nickname from an aunt who liked to address him as “Cheeky”.

In his youth, he marched as a lead soprano bugle soloist in a drum and bugle corps: St. Rose Scarlet Lancers of Chelsea, Massachusetts. Influenced by bebop, he started his professional career in the early 60s, and recorded his first album in 1966 (not released until 1968). After very well received trio Post Bop album Chick Corea - Now He Sings, Now He Sobs with drummer Roy Haynes and bass player Miroslav Vitous, he began recording a series of groundbreaking studio and live albums with Miles Davis 1968-70, before making 3 albums with Free Jazz and Fusion quartet Circle, as well as 2 solo piano improvisation albums in 1971-72. In 1971 he released the first Return to Forever album, and the band went from making Latin American acoustic and electronc music to a more Jazz Rock oriented approach during the decade. At the same time, Corea continued to explore Latin American and classical music, fusion and jazz, using mainly piano, electric piano and Minimoog. For the rest of his life, he kept on touring, recording and collaborating with numerous musicians, and was awarded 25 Emmys.

February 11, 2021
RIP Chick. Truly one of the great musicians and composers of the 20th and 21st centuries. His music will live on for generation after generation to admire and cherish. He was truly one of a kind.
Reply Notify me 9 Helpful

February 11, 2021
RIP. Chick Corea, your music will live on forever and forever.

February 11, 2021
Great great sadness. Shocked that this genius of a pianist and beautiful soul passed away 2 days ago.... We will miss you Chick!
Reply Notify me 4 Helpful