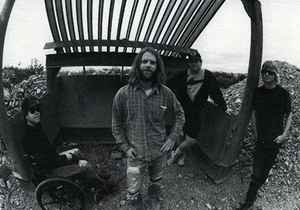 Profile:
Gravel was a band formed sometime in the late 80s in Anacortes, Washington. It was started by singer/guitarist Bryan Elliott and bassist Dale Robinson, who had previously been in a band called The Pounding Serfs. After recruiting guitarist Rich Papritz and drummer Bobby Vaux, the group started playing small shows around the Northwest, most notably Bellingham where they got roped into the garage rock revival scene that was happening (amidst the whole grunge thing) thanks to bands like The Mono Men and the indie record label Estrus Records. Gravel's debut album Break-A-Bone was recorded by PopLlama Records founder Conrad Uno at Egg Studios, and exemplifies life in the dark and depressing yet beautiful Pacific Northwest. Their follow-up album titled No Stone Unturned was released the following year in 1993 and though the album is not as memorable as Break-A-Bone, it still holds up. Anyways, these guys apparently toured a little and then just simply ceased to exist.
Members:
Bob Vaux, Bryan Elliott, Bryce Olsen, Dale Robinson, Rich Papritz