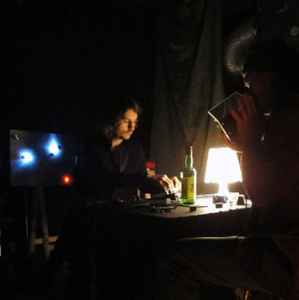 Profile:
Gamers In Exile was a UK-based experimental electronics duo, formed by two Italian producers in the early 2000s. The collective operated the Unbearable Recordings label in London to release the bulk of their recorded output.

Gamers In Exile extensively collaborated with Goodiepal, who permanently resided in the UK at the time, featuring him on the band's debut album and releasing several EPs and singles at Unbearable Recs. The band remixed one of Goodiepal's songs, "My Robotic Skills Have Failed," which later appeared on many compilations and Goodiepal's albums. Their label's website also hosted a page for Mainpal Inv., one of Goodiepal's projects. This tight association between the duo and Goodiepal eventually led to many online sources erroneously citing "Gamers In Exile" as one of Kristian's aliases or projects.
Sites:
MySpace, SoundCloud
Aliases:
Arcade Audio Assault System, My Selfish Desire
Members:
Guido Zen, Valerio Camporini Faggioni