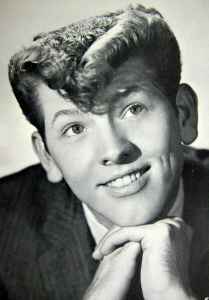 Profile:
Jimmy Clanton (born September 2, 1938, Baton Rouge, Louisiana) is an American singer who became known as the "swamp pop R&B teenage idol".
Brother of Ike Clanton.
His band recorded a hit song "Just A Dream" which Clanton had written in 1958. It reached number four on the Billboard chart. His songs "Just a Dream," "A Letter to an Angel," "Ship on a Stormy Sea," and "Venus in Blue Jeans," each sold over one million copies. In 1959, Clanton starred in a rock and roll movie produced by Alan Freed called "Go Johnny Go", and later in "Teenage Millionaire".
Clanton formed his first band called the Rockets in 1956 while attending Baton Rouge High School. One of the few white singers to come out of the New Orleans R&B/rock & roll sound, he rode the crest of the popular teen music wave in the 1950s and 1960s. Clanton became a disc jockey at WHEX in Columbia, Pennsylvania between 1972 and 1976 and performed in an oldies revue in the 1970s.