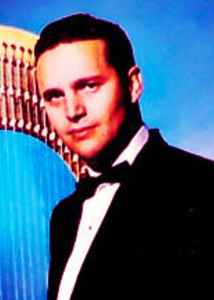 Real Name:
Eugene Capobianco
Profile:
Born Eugene Capobianco 29 March 1927, Hartford, Connecticut, jazz enthusiast Gene Bianco started off his career as a classical virtuoso harpist, and toured with major orchestras to rave reviews. His love for jazz, however, prompted him to explore the concept of using harp as a jazz instrument, an idea that was hitherto unheard of. Having appeared as a solo act in a variety of New York nightclubs, he later teamed up with guitarist Mundell Lowe and percussionist Joe Venuto to form a jazz trio which released an album on the obscure Major Records label. Soon after, RCA signed the group to a three-album contract, under which the albums "Stringin' the Standards" and "Harp, Skip and Jump!" were released.

However, RCA had a different idea of where the harp belonged. For a new record club partnership with Readers Digest, RCA bought out the existing contract and entered into a new contract with Gene Bianco which obliged him to produce easy-listening albums catered to the "middle-class market" (as described by a certain author). The first album, Joy To The World, was a hit. By then, Gene Bianco had been recast as "The Rainbow Sounds of Bianco" with his own personal logo on the front of his albums, which enjoyed first-class productions, and a full orchestra.

Nonetheless, Bianco prefers and opted for the anonymity and independence of life as a freelance session jazz musician, and ended up playing on dozens of great jazz recordings, such as all three of Paul Desmond's string albums, on Gil Evans' "Blues in Orbit", on Herbie Mann's "Push, Push", Alan Lorber's "Lotus Palace", and others. He also recorded with some of the best jazz singers around, including Carmen McCrae and Marlena Shaw. Some of his best session work of the 1960s and 1970s now shows up on sampling favorites such as the Blue Break Beats.

After 30 years as a studio player, Bianco went into the recording booth as a musical coordinator and contractor, screening and hiring musicians for recording sessions. Respected throughout the business, he worked with acts as diverse as Mary J. Blige, D Train, Stevie Nicks, Natalie Cole, and even Ray Charles. Recently, he put together the orchestra that accompanied tenor saxman Joe Lovano on Viva Caruso. He and Mundell Lowe even pioneered an instrument combining the harp and electric guitar that is now a standard feature of many pop orchestrations.

May 12, 2022
This profile states that "His love for jazz, however, prompted him to explore the concept of using harp as a jazz instrument, an idea that was hitherto unheard of," but it's worth mentioning that Dorothy Ashby's "The Jazz Harpist" came out in 1957. You can see the liner notes for her album right here on Discogs to see mention of earlier jazz harpists. Bianco may have been one of few, but there was plenty of precedent for jazz harp when Bianco was recording.