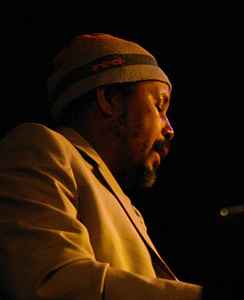 Proper recognition of this fine multi-instrumentalist's (piano, composer, vocals, saxophone, guitar) talents seemed long in coming, but since 1991 this modest and dignified performer has been very much in the limelight
touring internationally and releasing several albums with major record labels, as well as featuring on some massive releases from other artists.

Bheki Mseleku arrived on the Johannesburg music scene in 1975 as an electric organ player for an R&B outfit, and has over time adapted and grown into one of the world's finest musicians.
He is one of a number of supremely talented musicians who left South Africa and its oppressive apartheid system to take up residence in London, leaving South Africa's shores in the late 70's.

After extensive touring around Europe and the U.K., his debut performance at Ronnie Scott's in London 1987 saw him teaming up with some of the more prominent figures from London's Jazz revival scene.
This eventually lead to the release of his star-studded debut album "Celebration" in 1991, featuring the likes of Courtney Pine, Steve Williamson, Eddie Parker, Jean Toussaint, Michael Bowie and Marvin Smith
The album was well received and supported with a heavy touring schedule, and a deserved nomination for British Mercury Music Prize for Album Of The Year.
In Groups:
Malombo, Spirits Rejoice, The Bombdroppers, The Drive (2)
Variations:
Viewing All | Bheki Mseleku
B. H. Mseleku, B. Mseleku, B.Mseleku, Becki Musuleku, Beki H. Mseleku, Beki Mseleku, Bheki, Bheki Mselku, Bheki Msleku, H.B. Mseleku, Mseleku