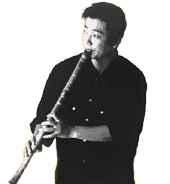 Profile:
Born in Tokyo, Japan on the 5th of June, 1954.
Emigrated to the US intending to become a fiction writer. Graduated from UCLA majoring in ethnic arts.
Started "Kazu Matsui Project" in 1981 with whom he has release 5 albums. Has also released 7 solo albums and has built up a career by playing the traditional Japanese Bamboo Flute, which can be heard on several movie soundtracks such as "Empire of the Sun" and "Shogun".
His wife Keiko Matsui has released several jazz fusion albums which Kazu has produced.
Sites:
kazumatsui.com, jsdi.or.jp
In Groups:
The Kazu Matsui Project, The Kazu Project
Variations:
Viewing All | Kazu Matsui
Kazu, Kazu Matsui (Snow crane), Kazu Matsuui, Matsui, Кацу Мацуи, 松居和