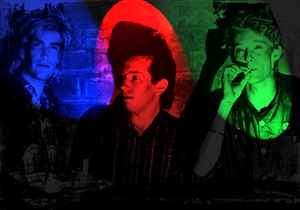 Profile:
Early in 1978 guitarist/bass player Alec Murphy and singer/songwriter Robert Windfield formed the nucleus of the band, Audio Vidiot. Robert and Alec hammered out "Man From China" which had a melodic, whistled hook that inspired Peter Gabriel's "Games Without Frontiers". After recording early demos, they added Alec’s brother, guitarist David Murphy, Chas Grey (Skulls, Wall of Voodoo) on bass and Marina Del Rey (Backstage Pass) on keyboard. The band rehearsed for much of 1978 and evolved a keyboard driven sound.

By 1979, Audio Vidiot had yet to play live and the band showed signs of imploding. Robert and David left, taking the name “Audio Vidiot” to return to a more seminal style. Drummer Chris Bailey joined, and Todd Homer arrived on bass. Alec and the other members re-named themselves ‘Vivabeat’.

In the summer of ‘79, Audio Vidiot played their first show at the Hong Kong Cafe in L.A.’s Chinatown with 'Red Cross' and 'Wall of Voodoo'. They continued experimenting with 4-track demos - recorded by Alec, who also filled in on bass. “I Don’t Care”, “God It's a Pity” and “Disco Town” were recorded in a basement across from Hollywood High. The residents of the house included Chris, David, and pre ‘Mötley Crüe’ member Nikki Sixx. But after a flurry of early gigs, Todd left to rejoin the ‘Angry Samoans’.

The Vidiots hit their stride during the fall of '79, with Mark (Spider) McCoy, from the NYC band 'The Stilettos', on bass. They played with ‘X’, ‘Go-Go's’, 'Plugz', and 'Black Flag' on the Hollywood/Chinatown punk circuit and recorded two songs that captured the energy and direction of the band –“ I Get Around” and “Kickboy” (Spider can be heard waking from a nod at the beginning of “I Get Around”). When Exene of 'X' heard the new songs, she suggested a name change from Audio Vidiot to 'Asphalt Angels'. Instead, the band simply dropped the 'Audio'.

When Spider left to join the infamous 'Mau-Maus', Todd rejoined the band for a while. Spider returned from time to time, and as always, Alec filled in the gaps. In early 1980, Robert Bryan joined The Vidiots on bass, having previously played drums for 'The Silencers'. After much rehearsal the band went into Byrdcliff Studio on the old MGM lot and laid down basic tracks for an album. It was their first foray into a real studio, but only two songs from those sessions were completed – “Live Again”, and “Naming Names”.

That summer, after expressing frustration with the band's increasingly languid direction, Robert Bryan left. The Vidiots regrouped with bassist Bob Giddons, and contributed a song to the 'Urinals' Happy Squid Sampler EP, going back to Byrdcliff and recording the sublime Laurie's Lament. The one minute forty-one second song included a tempo change and a Rik L Rik lizard king chant. Laurie's Lament would go on to appear on the first ‘Rodney on the Roq’ compilation, the Bloodstains English bootleg compilation, the feature film documentary ‘Stoked, the Rise and Fall of Gator’ and most recently, the ‘Keats Rides a Harley’ compilation.

After that the Vidiots only played sporadically at venues like the Zebra Club in San Diego, and the 7th Veil strip club on Sunset Blvd. They recorded two more demos in late 1980. Eyes of Fear and Hard to Buy showed growth in style, but the core band members were already drifting apart. Chris joined 'Phast Phreddie and Thee Precisions, then 'The Little Kings'. David played with the 'Rik L Rik Band' and an early formation of 'Concrete Blonde'. Audio Vidiot founding members Alec and Robert got together for one last collaboration, which resulted in “Fat Haus”, with David contributing a background guitar track. And in essence, the band came full circle.

Laurie’s Lament was the only Vidiots song ever to leave the vault, until now...
Members:
Chris Bailey (13), David Murphy (10), Robert Windfield
Variations:
Viewing All | The Vidiots
Vidiots