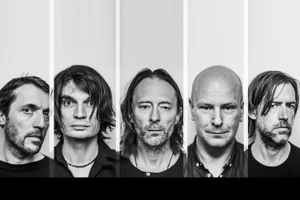 The name Radiohead comes from the Talking Heads song, "Radio Head", from the "True Stories" album.

Formed by school friends in 1986, Radiohead did not release their first single until 1992's "Drill EP". The cathartic "Creep", from the debut album "Pablo Honey" (1993), became a worldwide hit as grunge music dominated radio airwaves.

Radiohead were initially branded as a one-hit wonder abroad, but caught on at home in the UK with their second album, "The Bends" (1995), earning fans with their dense guitar atmospheres and front man Thom Yorke's expressive singing. The album featured the hits "High & Dry", "Just" and "Fake Plastic Trees".

The band's third album, "OK Computer" (1997), propelled them to greater attention. Popular both for its expansive sound and themes of modern alienation, the album has been acclaimed by critics as a landmark record of the 1990's, some critics go as far to consider it one of the best of all time. "Kid A" (2000) marked further evolution, containing influences from experimental electronic music.

"Hail To The Thief" (2003) was seen as a conventional return to the guitar and piano-led rock sound. After fulfilling their contract with EMI, Radiohead released "In Rainbows" (2007) famously via a pay-what-you-want model. Their latest album, "A Moon Shaped Pool", was released in May 2016.

September 4, 2021
Kid A/Amnesiac anniversary box set has been all but announced. Any day we'll get some information. I bet there will be a new video on TikTok on Monday.
See 1 reply

April 22, 2020
There's a great deal I enjoy in Radiohead's music but I'm not sure I understand the pedestal upon which they've been placed. I think I respect the band more stylistically than I do their actual music; OK Computer being the only album of theirs that I'd accept as brilliant throughout (although I find much to enjoy in Kid A, In Rainbows, The Bends and Amnesiac). For me, In Rainbows is probably the only album of theirs post OK Computer that successfully blends their penchant for electronic effects with quality songwriting successfully and is a close second-favourite of mine.
See 4 replies

April 28, 2019
They are not in a major label since 2003 because it doesn't matter anymore. We are living in 2000's, not 80's.
I remember, when i was watching Ergo Proxy like 5-6 years ago, the credits came and i heard an amazing music.
"What the hell??? Isn't that an anime? Ending theme has to be a shitty J-Pop!"
I waited the names like 1 minute, and i saw:
Ending theme: "Paranoid Android" by Radiohead.
Thanks Ergo Proxy. Before 2012, anime world was really good...Now it's just a joke.

February 2, 2019
The only album that is bad, or at least mediocre, is Pablo Honey.
See 1 reply

August 12, 2018
An incredibly worthwhile band for those that like anything from Miles Davis to Bjork to Can to even Dinosaur Jr.

November 2, 2017
Soapbox standing:
Radiohead - I cannot love this band enough.
They are one of the best contemporary artists in this age.
Their songs grow on you the more you hear them, kind of like Pink Floyd did for me or Rush for that matter.
I tend to gravitate towards their slower numbers with piano and or guitar.
Great chord/time changes in many of the albums... Daydreaming has a wonderful ending.
Pyramid Song has strange/cool timing but what a beautiful number!
Hopefully you discover how great this band is for yourself!

May 15, 2017
Not a indie band. This band is not associated with a independent label therefore it is not indie just a simple alternative rock band. Honestly I have heard better real indie bands during Radio heads time period of the 90s. This doesn't mean they are a terrible band because they are not but when people glorify they are amazing they overreact. The band is average at best not a 10 or a 9 or even an 8 but a 7 band. Creep seems to be the most well song of theirs. Anything else that comes by from them just didn't have that impact. But as I mentioned the band isn't indie since it is not part of any Independent label EMI, Capitol and Parlophone are not indie labels. Those are major labels. But like I said as well. They aren't good and they are not bad. Just a in between band that made one single
See 3 replies

February 27, 2017
The guitars are to good to ignore. But fucking hell those god awful vocals. Ear cancer. Still if your in desperate need of more REM type music for adults then fill your boots.
See 5 replies

January 6, 2017
Everybody thinks A Moon Shaped Pool is better than The King of Limbs, people suck.
See 2 replies