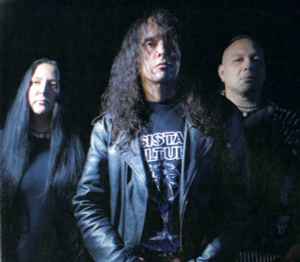 Profile:
Terrorizer is a Grindcore band from Los Angeles / Huntington Park, California. After releasing a handful of demo tapes in 1987 and 1988 and splitting up in 1988, they recorded the full-length album "World Downfall" posthumously in the now legendary Morrisound Recordings studio (Tampa, Florida) with engineer-guru Scott Burns. At the time of this recording Terrorizer's original bass player Garvey was in jail so David Vincent (MORBID ANGEL) filled in.

Another interesting fact is that "World Downfall" consists of about 30% Nausea songs, including the title track.

In 2006 Terrorizer released their long-awaited second album "Darker Days Ahead" which consists of half old demo songs and half new material. Shortly after the release of the album, Jesse Pintado passed away on 27 August 2006.

The band has been reactivated in 2008 demo-ing new songs. Guitar duties are now taken over by Katina, guitarist in Resistant Culture.