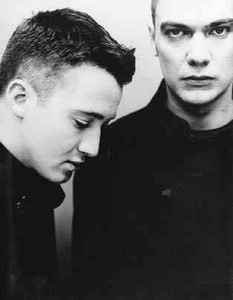 Profile:
Day One consists of vocalist Phelim Byrne and multi-instrumentalist/producer Matthew Hardwidge. The duo began collaborating in the mid-’90s, blending the storytelling traditions of hip-hop and British folk along with a slew of musical influences. They were fortunate enough to find a collaborator in Mario Caldato Jr. (Beastie Boys, Beck, etc.) to work with on their projects he has co-produced all of their output to date. The duo was originally signed to Massive Attack’s label Melankolic, on which they released their debut album "Ordinary Man" in 2000 to great international success. They released their 2nd album, "Probably Art", in 2007. The group paved the way for artists such as The Streets in pioneering a unique new British rap style. Day One’s diversity is reflected in the various TV and movie soundtracks in which their music has featured, including: dark, teenage epic "Cruel Intentions", Emmy Award-winning US series "Six Feet Under", Channel 4 hit "Skins" and most recently the hit US movie "Easy A". The group's third album was recorded in Los Angeles in early 2015.
Sites:
dayoneuk.wordpress.com, Wikipedia, Facebook
Members:
Matthew Hardwidge, Phelim Byrne