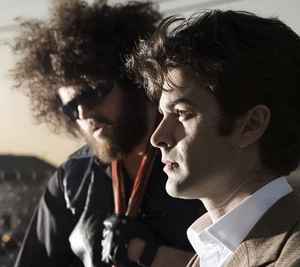 Profile:
Big Business started 2004 as a two piece band composed of Jared Warren (Karp, The Tight Bros. From Way Back When) and Coady Willis (Murder City Devils). Their sound has been characterized as a bombastic and frantic low end attack, marked by Warren's signature vocal delivery. The band released its first album, "Head for the Shallow", on January 25, 2005.
Originally from the Seattle area.

In 2006, Jared and Coady were asked to join the Melvins who were once again without a bass player after Kevin Rutmanis had been added to the bassist morgue. Jared took over the bass duties while Coady played a second drum kit along with Dale Crover. They recorded (A) Senile Animal in July 2006, and started a U.S. tour in September with Big Business, among others, opening up. During these shows they were sometimes joined by Melvins drummer Dale Crover on guitar. They stayed on with the Melvins to record two more albums, Nude With Boots and The Bride Screamed Murder. After this time, Melvins and Big Business started slowly separating ways, while still occasionally playing live shows together, as the Melvins began experimenting with other bassists in a three-piece arrangement, first attempting Melvins Lite with Trevor Dunn on stand-up bass.
Sites:
instagram.com, bigbigbusiness.com, Bandcamp, Facebook, Twitter
Members:
Coady Willis, David Scott Stone, Jared Warren, Scott Martin (12), Toshi Kasai
Variations:
Viewing All | Big Business
Big Biz, Biz