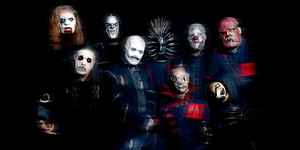 Profile:
Slipknot is a metal band from Des Moines, Iowa, formed by vocalist Anders Colsefni, percussionist Shawn Crahan and bassist Paul Gray (3) in September 1995. At first, they called themselves "The Pale Ones," then debuted as "Meld" on December 4, 1995, and finally settled on "Slipknot," a suggestion by Jordison. They also performed at least two shows in June 1996 under the moniker "Pygsystem."
Since their inception, the band went through various lineup changes and eventually ended up with nine members shortly before their signing to Roadrunner Records in 1999. After the death of Gray on May 24, 2010, and Jordison's firing on December 12, 2013, Alessandro Venturella and Jay Weinberg were brought in as replacements. In early 2019, Fehn was fired and replaced by an anonymous musician who was revealed to be Michael Pfaff in February 2020.

November 16, 2020
I hope Slipknot gets box set treatment soon. There's so many non-LP tracks out there. It would also be nice to have all the Deluxe Editions in one place.