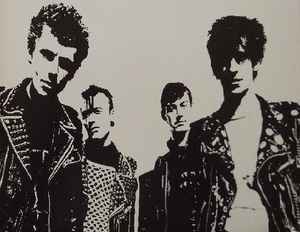 Profile:
German punk band from Bottrop formed in 1980. Their first gig was in April 1981 at a local youth club. They were the first punk band from Germany touring the USA in 1985.
Their last gig was 2003 at the ship "Stadt Rees" which drove from Duisburg to Düsseldorf. On 01.04.22 they returned for one night to the Don´t Panic Club in Essen to play a benefiz show for the victims of the war in the Ukraine.
Sites:
Facebook, Wikipedia
Members:
Anton Kunze, Christian Müller (36), Crocker (2), Dirk (9), Mario Pietryga, Uli (4)
Variations:
Viewing All | Upright Citizens
The Upright Citizens, UC, Upright Citizen, Upright Citizens, The