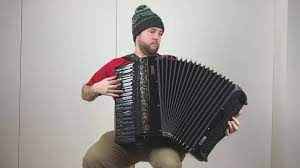 Real Name:
Murray Grainger
Profile:
Murray Grainger is an experienced and much sought after accordionist. Trained at the Royal Academy of Music he is in demand both as a traditional and a classical player. He has worked as a session musician for the BBC, ABC TV, Warner brothers etc. He has performed both in the BBC Proms and at Glastonbury and this flexibility of style means he is much in demand. His current schedule is crammed full with his band roster including Dodo Street, Hérétique, Finality Jack, Summerhayes & Grainger, Captain of the Lost Waves, Songs of Edith Piaf as well as regularly performing with the Monster Ceilidh Band, Aluin Ceildh and other impromptu bands. This rich and wide-ranging experience has established Murray Grainger as one of Britain's most influential and innovative accordionists. Whether working with the finest orchestras, pushing the boundaries with his traditional projects or teaching around the UK, Murray is at the forefront of the British accordion scene.
Born in 1973 Murray Grainger began playing the accordion when he was eight years old. Starting lessons with UK renowned piano-key player Alice Swindells, he continued his studies with Professor Owen Murray before graduating from the Royal Academy of Music, London, in 1996. Murray then gained tremendous experience both as a solo performer as well as working with many orchestras and chamber groups, including the BBC Symphony Orchestra, Liverpool Phil, Northern Sinfonia, Scottish Ballet, Opera North, Almeida Opera and Scottish Chamber Orchestras. Murray can boast performances at such events as the BBC Promenade Series and Edinburgh International Festival, recitals at venues such as Manchester’s Bridgewater Hall and many broadcasts on BBC Radio and TV. He has collaborated with composers in the writing of new works for the instrument, giving World and British premiers of works by Jonathon Dove, Eddie McGuire, Gerhard Stäbler etc. In 1999 Murray returned to his roots in Manchester and has since explored many areas of the music world. Working in a variety of fields from traditional, through classical and jazz to commercial and popular music, and as an accomplished player of both piano and button key accordions, the bandoneon and the accordina Murray has become a renowned exponent of the modern accordion. As a traditional player he has worked with many of today’s top performers from Cormac Byrne, Andrew Dinan, Desi Donnely, Miranda Sykes, Maartin Allcock etc. and at festivals around the world such as Celtic Connections, Sidmouth International Festival, Folk Est Italy, Festival Interceltic de Lorient France etc. Murray is well respected in the field of education, teaching regularly at Halsway Manor, Hands on Music in Witney, with previous educational endeavours including head of accordion studies at Chetham’s School of Music, and has been a guest tutor on the Folk and Traditional Music Course at Newcastle University, Bangor University, Liverpool’s Hope University, and The Orkney Traditional Music Project. As a recording artist he has released mutiple albums, filmed a renowned accordion tuition DVD, written 2 books and is currently in the studio preparing 2 new albums.
Sites:
captainofthelostwaves.com, piafthesongs.com
In Groups:
Captain Of The Lost Waves, LinnTilla, The Ciderhouse Rebellion, The Mahogany Gaspipes