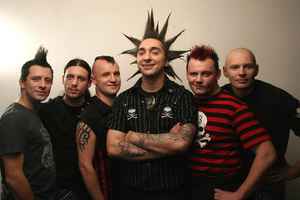 Profile:
Korol' i Shut (King and Jester, Russian: Король и Шут) is a Russian horror punk band from Saint Petersburg who takes its inspiration and costumes from tales and fables.

The band was formed in 1988 by school friends in Saint Petersburg around founder members Михаил "Горшок" Горшенев (Mikhail "Jug" Gorshenev), Александр Балунов (Alexandr Balunov) and Александр Щиголев (Alexander Shchigoliev). Singer Андрей "Князь" Князев (Andrei "Knyaz" Kniazev) joined the band in 1990 and guitarist Яков Цвиркунов (Yakov Tsvirkunov) in 1997. The band's name, which means The King and the Jester, was adopted in 1992, its previous name was Контора (Bureau).

Korol' i Shut is the first Russian band that refers to tales figures like trolls, dwarves and vampires, as well as contains many figures from Slavic mythology.

The band recorded for the first time in 1991 in a semi-professional studio. It was programmed on the radio soon after and began to tour in Saint Petersburg's clubs. From 1993, it started touring also in Moscow. Korol' i Shut toured over Israel and United States in 2003.