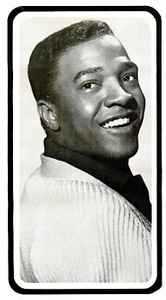 Real Name:
Clyde Lensley McPhatter
Profile:
American singer, perhaps the most widely imitated R&B singer of the 1950s and 1960s, making him a key figure in the shaping of doo-wop and R&B.
McPhatter was lead tenor for Billy Ward And His Dominoes & largely responsible for the success they initially enjoyed.
After his tenure with the Dominoes, McPhatter formed his own group, Clyde McPhatter & The Drifters, before going solo.
Only 39 at the time of his death, Clyde McPhatter left a legacy of over 22 years of recording history. He was the first artist in music history to become a double inductee into the Rock and Roll Hall of Fame, first as a member of The Drifters, and later as a solo artist. as a result, all subsequent multiple inductees into the Rock and Roll Hall of Fame are said to be members of "The Clyde McPhatter Club."
Born: November 15, 1932, Durham, North Carolina, U.S.A.
Died: June 13, 1972, New York City, New York, U.S.A.