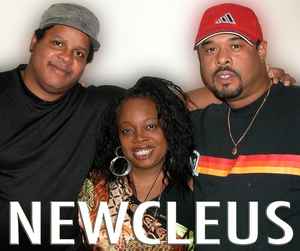 Profile:
Although they recorded only two albums, Newcleus contributed one true electro classic in "Jam on Revenge (The Wikki-Wikki Song)," which has been immortalized on hundreds of hip-hop mixtapes and often included in even techno DJs' sets. The origins of Newcleus lay in a 1977 Brooklyn DJ collective known as Jam-On Productions, including Ben "Cozmo D" Cenac, his cousin Monique Angevin, and her brother Pete (all teenagers and still in high school). Many members - MCs as well as DJs - came and went as the group played block parties all over the borough, and by 1979, the group centered around Cenac, his future wife Yvette "Lady E" Cook, Monique Angevin, and her future husband, Bob "Chilly B" Crafton. (The foursome named their group Newcleus as a result of the coming together of their families). By this time, Cenac had begun to accumulate a collection of electronic recording equipment, and the quartet recorded a demo tape of material. With several minutes left at the end of the tape, Newcleus recorded a favorite from their block parties, with each member's vocals sped up to resemble the Chipmunks. The track, "Jam-On's Revenge" impressed producer Joe Webb more than the other Newcleus material, and it became the group's first single, released in 1983 on Mayhew Records. A huge street success, the track became known unofficially as "the Wikki-Wikki song" (after the refrain); when it was re-released later that year on Sunnyview Records, it had become "Jam on Revenge (The Wikki-Wikki Song)". The single hit Top 40 on the R&B charts in 1983, and its follow-up, "Jam on It," did well on even the pop charts. "Computer Age (Push the Button)" was a more mature single, with accomplished rapping and better synthesizer effects, and it also hit the R&B Top 40. The first Newcleus LP, Jam on Revenge, was a bit of a disappointment, and their second album, Space Is the Place, did even more poorly upon release in 1984. Without a single as noteworthy as "Jam on Revenge" or "Computer Age", and with the advent of Run-DMC's organic, rock-influenced approach to rap music, Newcleus faded quickly. Though the Cenacs and the Craftons continued to record sporadically until 1989, they didn't hit the R&B charts after 1986.
Sites:
jamonproductions.com, oldschoolhiphop.com, hiphopbebop.com, Facebook, Wikipedia, whosampled.com
Aliases:
The Move (2)
Members:
Ben Cenac, Bob Crafton, Lady E (2), Monique Crafton, Tracy Greene
Variations:
Viewing All | Newcleus
New Cleus, Nucleus

April 18, 2016
It should be mentioned that Mr Cenac created two fantastic oldschool house recordings, as Dream2Science (»My Love Turns To Liquid«) and Sha-Lor (I’m In Love).